For thousands of years, many yoga practitioners have followed a vegetarian, or “sattvic” diet.  In Sanskrit, sattva means “of the highest, purest energy.”  A sattvic diet fuels the body with the strongest energy, or “prana,” available. 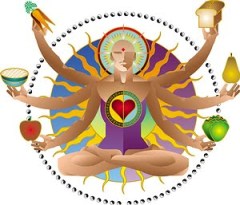 The choice of a vegetarian diet can be humanitarian, biological, or nutritional. Biologically we are omnivores with the ability to eat both meat and vegetables, but modern science supports the theory that a vegetarian diet can be more nutritious and better for digestion. It can also lower the risk of many  illnesses, including heart disease and cancer.

Eating meat can have several detrimental side effects. Environmentally, raising cattle uses a tremendous amount of fossil fuel, and the methane released by the animals can heavily impact global warming. Eating meat can also have an adverse affect on our immune system, causing our digestive system to work harder than necessary to keep up, often exerting too much energy. This can cause the body to work against itself in an effort to survive–the root of many illnesses and cancers. And, the quality of meat we eat can take an even deeper toll on our health. Typically far from organic, most factory farmers use harmful chemicals and growth hormones to enhance their animals and, over time, ingesting these chemicals can overrun our immune system. These two factors alone can cause many health problems ranging from high cholesterol to colon cancer.

Making the shift from meat eater to vegetarian is an individual choice that can be difficult for many of us. If you’re interested in a vegetarian diet, try easing the transition by adding meatless meals to your menus and then noticing how you feel after each meal.  You may find you enjoy vegetables more than meats, feeling less weight in your gut, and more overall energy. For thousands of years, yogis seem to have intuitively known what empirical data now supports. Perhaps we should try following their lead.

Guest blogger, Dominic ‘Narayan’ Foti, was raised by yogi parents and later graduated from the University of Vermont with degrees in Philosophy and English. He’s now in graduate school for Mental Health Counseling and is a martial arts instructor and certified Sivananda yoga instructor. Dominic and Shanell met at the Sivananda Ashram during Sivananda yoga teacher training.

One response to “Linking Intuition to Modern Science–Vegetarian Diets”

Bound for Bliss Detox Bath Salt is the perfect addition to your at home spa experience. Just add a cup of this pure Epsom Salt and Dead Sea Salt bath soak for deep relaxation.

"Shanell is a powerful yoga teacher–her knowledge is strong but her spirit makes even more difference. She is encouraging, uplifting and funny. Shanell’s thai yoga massage has helped me move from a scooter to walker to upright. Thai yoga’s deep stretching and energy realignment has changed my body. Shanell has helped to change my heart." ~ Katherine– Group Yoga and Thai Yoga Client More Reviews ....http://boundforblisslife.com/thai-yoga-bodywork-2/thai-yoga-bodywork-reviews/

Purchase me online or in person!! www.boundforblissshop.com